I have some happy news for this week. Arrow to His Heart came out! The book dropped nearly a week ago, and I've barely even mentioned it to my legions of loyal followers. *waves to twenty people in the crowd*

You probably know that over at the Moncur house, we are in middle of a drawn out and kind of unwanted move to a new state. Over the past six months, I've watched each of the members of my little family fall apart, build themselves back up, and become someone who can go out into a strange, alternate reality and carry on. They are all much braver than me. We are a ragged little crew, walking daily on a precarious line between okay and not-okay. I'm not someone who likes to show the weaker side of myself, and certainly not online, but I hope you can understand why this book is later than anticipated and how tweaking the final proof copies did not seem like a number one priority to me for many months.

Completing a book is worth celebrating. Releasing a book is doubly so, and yet I don't feel much like celebrating. But dear readers, book bloggers, and yes, book buyers, you have made my heart grow two sizes this week.

So now that the new book is finally here, I can take a breath. Okay, total lie. There are still three more Stripling Warrior books slated to release THIS YEAR. I might never breathe again.

You may have known this book under its former title, The Spy of Cumeni. After I finished writing the third book in the Daughter of Helaman trilogy, I planned to write Zeke's story next, but Kenai's story wouldn't leave me alone. I didn't know the stories would develop into seven companion novels which are now the Stripling Warrior series, but that's what happened and, as it turned out, Zeke needed a couple years to stew and think things over, to build himself back up and become someone who could go out into a strange, alternate reality and carry on. His story is scheduled to release the first week of July, but in the meantime, I hope you enjoy the story about Kenai and Isabel.


In a delightful new book from Misty Moncur, a broken nose and two black eyes are all it takes for her vibrant young heroine to heal the heart of a scarred and lonely ex-soldier.

Silent and invisible, Kenai was the best spy in the stripling army, but all he wants to do is forget what happened during the war. Nothing feels right at home anymore. What good is being a spy among people who have no secrets? He should just slip away into the woods and go back to being invisible, but that’s hard to do when a pretty little village girl is constantly on his tail.

Isabel can’t help but notice her brother’s friend is acting strange. They say he was a brave soldier, Helaman’s most trusted spy, but men like that don’t sleep all day, refuse to eat, and avoid their friends. So Isabel does a little spy work of her own, and what she finds in the warrior’s wounded heart might just help her find what’s hidden deep inside her own. 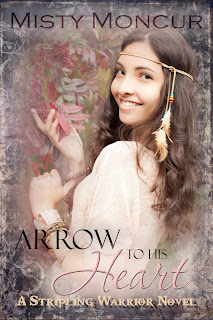 "What's wrong with his face?" Micah asked squinting a little to see into the distance.

"Maybe this is a little more complicated than you let on." For some reason, I loved the admonishing in his voice.

"No, it's exactly as humiliating as I represented it."

"Izz," he said with affection. "Take a deep breath. Give everyone a chance to explain. Especially the guy with the broken nose."

My eyes shot to Kenai as he walked toward us. "Do you think it's broken? Can you tell from here? He told Eliam it wasn't."

"He lied. That nose is broken."

And finally, if you are still reading, you must love me very much. If you would like to spread the word about Arrow to His Heart and the rest of the series, see the details at the link below and consider signing up.

(I think you have to make an account there to sign up. If that is not appealing to you, just email me. My email address is on the sidebar.)