We went to Arches this weekend. We took the kids on a couple easy hikes; we did Balanced Rock and the Windows and Turret Arch. 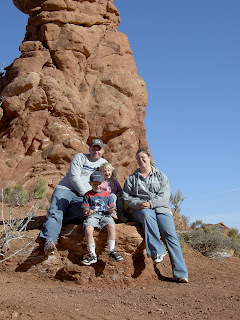 Here we are at Balanced Rock. The nice old man from Oregon who offered to take our picture said he couldn't get both the formation and all of us into the picture. Personally, I think it would have been more spectacular if he had gotten just the balanced rock, but here we are in any case.
We really wanted to see Delicate Arch since neither Dave nor I have ever seen it, even though we've been there lots of times. But, alas, the trail was closed. We would have settled for seeing it from the overlook, but that was closed, too. This was really disappointing.
So we decided to take one of the dirt roads way out to the west end of the park. We went out to the trailhead for Tower Arch. We hiked three miles with our babies. Zach was such a trooper. Kammy out and out quit about ten times and had to be carried on her daddy's shoulders. But we made it. And for a bonus, the kids slept half the way home from Moab.
Here are some more pictures. 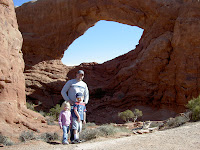 At the South Window
Trail to Tower Arch 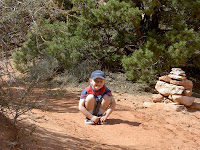 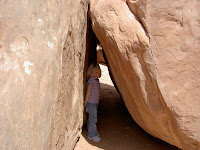 Labels: Life in the trenches

Heather said…
How very awesome is that! The pictures are so cute! Sounds like the kids did good on the trail. Kammy must take after her Aunt Heather, however. It's usually ME that decides ten times to quit on the side of the trail! *grin* Thanks for sharing the adorable pics!
March 26, 2008 at 4:05 PM

Dan said…
Looks like it was a lot of fun. Annie still has never been to Arches; we need to go some time.

Annie said…
I'm seriously jealous! How fun. Your pictures are great. I would rather see you all than the arch anyway! Where did you stay?
March 27, 2008 at 10:54 AM

Misty Moncur said…
All you need is a light jacket? Laura, I have been laughing for ten minutes! (That's from Miss Congeniality, if you guys didn't know). This was the PERFECT time to go to Moab. It was around 65 degrees and got down to about 40 at night. If it had been any warmer we would never have made i out of that canyon. We stayed in a cabin at the KOA on the south end of town. There are a ton of hotels down there. It never occurred to me that you could go to Moab and not camp. We should go down and run the river or something. The kids' favorite parts were the playground at the KOA and going to McDonald's. We could have done that here. Kids.
March 27, 2008 at 12:45 PM

Elsie said…
Thanks for the pictures - they are wonderful. Reminds me of all the times we've hiked Arches and all the pictures we've taken. It is really nice down there this time of year. Thanks for sharing.
March 29, 2008 at 8:46 AM